This week, Harvard announced that all course instruction will be taught online for the 2020-21 academic year. The $50,000 price tag will remain.

This is disappointing — especially after surveys found that 75% of college students across 45 colleges in the U.S. were unhappy with the quality of online learning during lockdown:

For many students, a large part of the college experience stepping out of their comfort zone and engaging with fellow students and professors — an experience that is cut short when they are forced to learn from their iPad in their childhood bedroom.

Students from low-income or under-represented backgrounds are disadvantaged even further.

“Even when overall outcomes are similar for classroom and online courses, students with weak academic preparation and those from low-income and under-represented backgrounds consistently underperform in fully-online environments,” reveals Does online education live up to its promise?, a paper written in 2019 by George Mason University professor Spiros Protopsaltis and Urban Institute fellow Sandy Baum.

Meanwhile, wage growth for college graduates is stagnating. Despite the growth of the economy between 2015 and 2018, graduate starting salaries increased by just 1.4 percent during the same timeframe.

For those who do enjoy online learning, the online university experience can be emulated using MIT OpenCourseWare — and it’s completely free.

As universities face pressure to reopen, students suffer the consequences 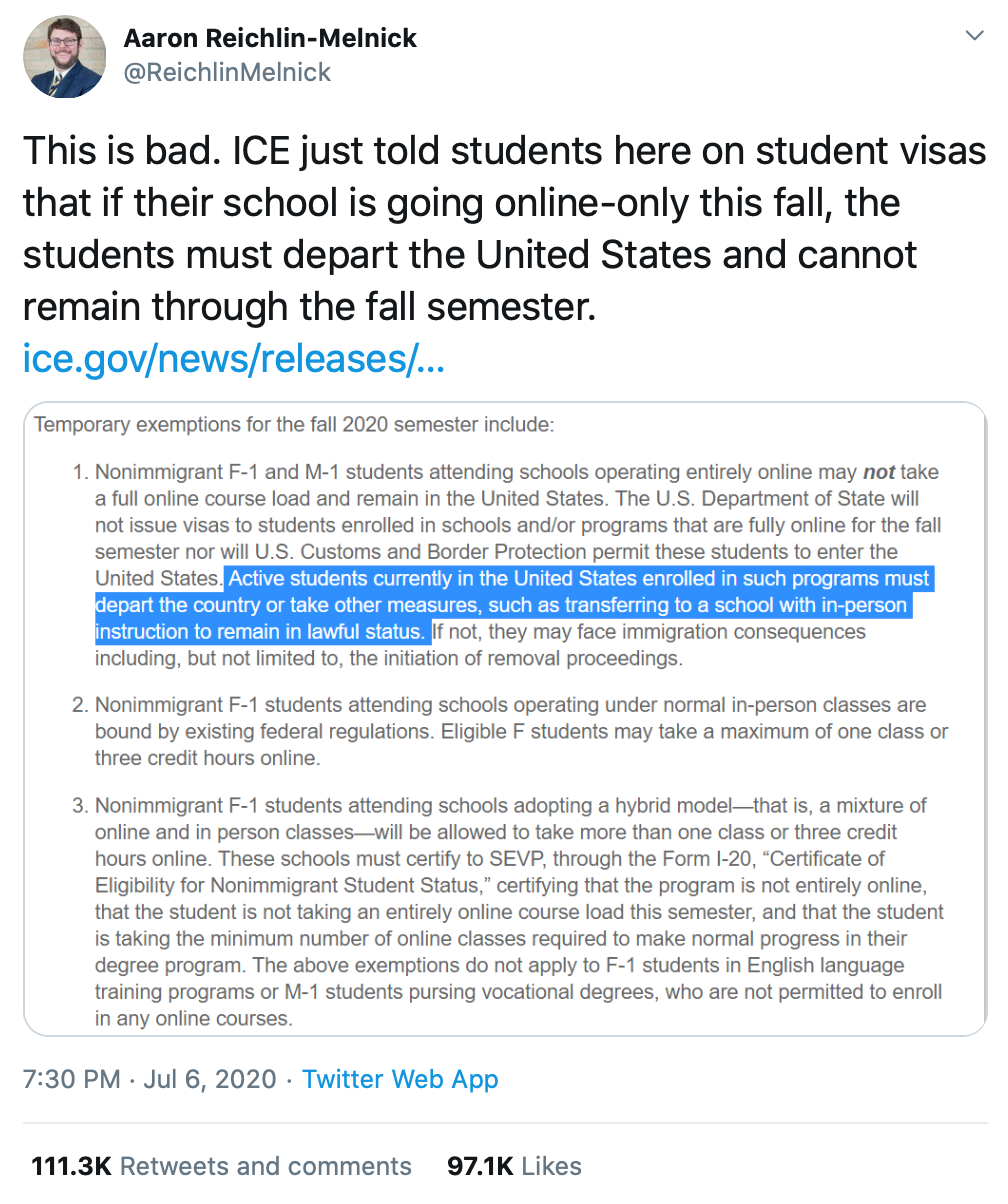 While demanding that students continue paying full tuition fees, U.S. Immigration and Customs Enforcement (ICE) announced that students currently living in the U.S. on student visas will be forced to leave the country if their courses are going online-only this fall.

To keep their visas, international students must take at least one in-person class.

Harvard and MIT have publicly criticized the decision to withdraw visas from students, and have recently sued immigration services.

“The order came down without notice—its cruelty surpassed only by its recklessness. It appears that it was designed purposefully to place pressure on colleges and universities to open their on-campus classrooms for in-person instruction this fall, without regard to concerns for the health and safety of students, instructors, and others,” Harvard University President Larry Bacow wrote in a letter to the Harvard Community.

There are many issues with forcing people to leave the U.S. while they’re still trying to complete their degree in the U.S. Poor internet coverage, large time differences, and inadequate access to resources is just the beginning.

Students living in restricted areas (such as China, Hong Kong, or Iran) may not even have access to some of the required technology as a result of government firewalls. For students studying sensitive subjects that their governments disapprove of, the repercussions could be even more severe.

Students currently living in the U.S. could even find it difficult to get home given that many countries have imposed travel restrictions on the U.S, which is widely considered to be a ‘COVID-19 hotspot’.

For most high school students — even those with mediocre grades — college feels like a natural next step. But the job market is changing rapidly, and a degree no longer guarantees a job. Meanwhile, alternatives to full-time employment such as learning to program online or starting a side project are becoming increasingly accessible.

This week it was announced that soon, having a college degree will not be required for federal employment in the U.S. Instead, priority will be given to an applicant’s skills. 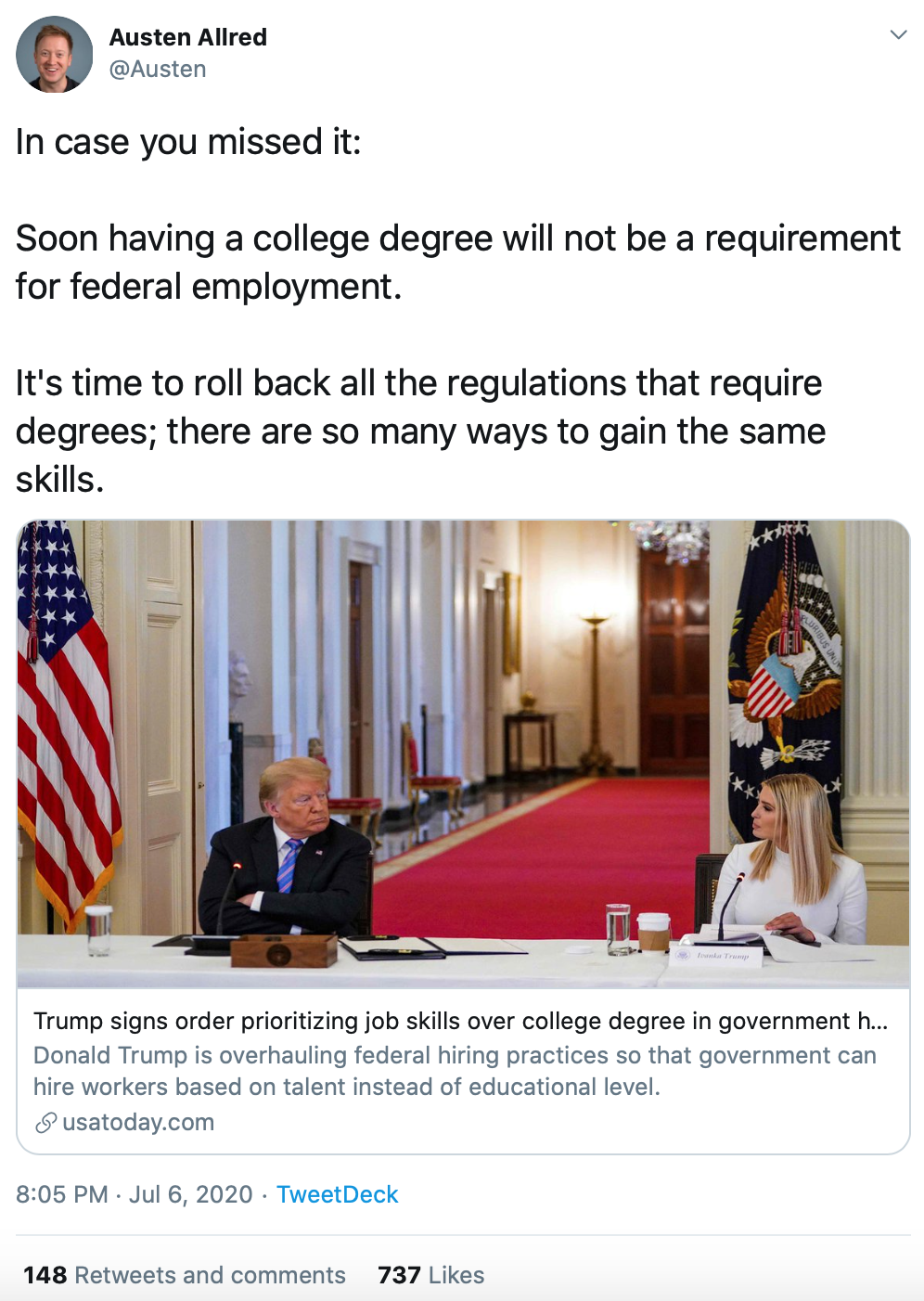 If there is something sinister behind this decision, it remains to be seen. On the face of it, it seems like a step in the right direction.

There are many tools on the market that help create relevant and personalized messaging for your customers. But without an agile approach to digital marketing, your business may still be challenged with getting people to take action. Join experts from Ad-Lib.io and learn why marketers should not only look at tools but also at marketing […]

ICYMI, Apple will block tracking pixels, IP addresses and cache images for its Apple Mail email users reading messages on Apple devices. The aim? To protect its users’ privacy.  As you might expect, the reaction has generated two camps: The “sky is falling” folks say they will lose all insight into customer behavior. They won’t […]

Good morning, Marketers, sometimes using personalized messaging with consumers is getting too personal. It doesn’t help when the finer points are flubbed, as you’ll see in our first piece below. Are you setting up these messages to fail with your customers? It might be time to rethink how you’re using data, and we have some […]

MarTech’s daily brief features daily insights, news, tips, and essential bits of wisdom for today’s digital marketer. If you would like to read this before the rest of the internet does, sign up here to get it delivered to your inbox daily. Good morning, Marketers, social media means different things to different users. The same […]

Like many pandemic-inspired consumer dining trends, the meal kit delivery services (MKDS) market has seen tremendous growth over the past year. That growth has been fueled by limited dining out options combined with consumers’ desire for healthy convenient meals. At the same time, many millennials who prefer homemade meals over fast food are also driving […]

Along with paying a $268 million fine, Google agreed to adjust its ad technology to provide more flexibility and transparency as well as improve the way its Ad Manager services works with rival ad servers and sales platforms. “We have agreed on a set of commitments to make it easier for publishers to make use […]

Here’s something to yodel about. The safeguards people are taking during the pandemic have caused cold and flu cases to plummet, which is a great thing for humanity. But it’s not so great for an iconic cough drop maker like Ricola, which has seen sales decline 40% during the pandemic. To turn things around, the […]